Love One Another by Timothy Stuetz
Buy for $4.95

A magical eclipse provides a blank canvas on which Bliss Beary Bear™ inscribes a letter of Star Shine to the people on Earth.
The letter urges them to take the time to experience the wonder and variety of love and beauty that exists in their every day lives and throughout Creation. 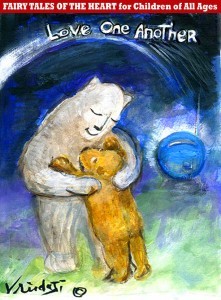 Love One Another Passage

Suddenly, before I could complete my request, My Magical Heart™ began to pulsate and glow, framed by a silver‑white mist.
Though I had witnessed its miraculous opening millions of times before, this was something special.
As rays of the most brilliant, almost blinding, silver-white light poured out, an eclipse drew a blanket of darkness around the entire world.
An empty tube, resembling a giant stick of chalk, appeared in my right paw.
Then, as if sucked up by a giant vacuum cleaner, every star and comet in the Universe rushed to fill that tube with star shine.
“Whoa!”  My mouth opened in wonder.
The Great Bear™ had transformed the entire Universe into a dark canvas and given me a pen of star shine to write my letter!